What to do with wearables? 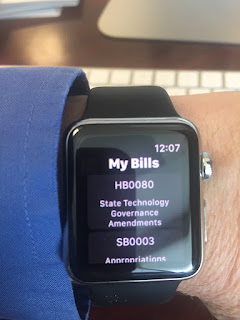 I've seen a few interesting wearable apps out there for government, but not many. I'm now testing a new Apple Watch app that we're developing with Utah Interactive that makes a lot of sense. We had to update our existing Bill Watch app to Swift in order to make it available on the watch. The app keeps users informed of any changes made to bills during the 45-day Utah legislative session. The existing mobile app was a game-changer for bill-followers during the session where about 1000 bills are discussed during this compressed time frame. The watch will make it even easier to get notified and check status while so many other things are going on.

We're also working on some other projects in this area.
Posted by David at 3:56 PM