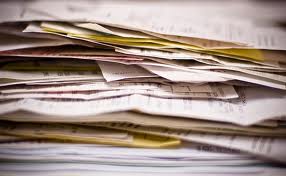 Interactive digital government is falling behind.  Even though it seems that we are making progress, we are not doing enough and the challenge may be getting bigger.  Last year, we created 76 new online, interactive services in Utah. That seems pretty good and there was a lot of work to create these services and automate much of the business processes that accompany them.

The only problem is that during the time we created these interactive services, agencies put 2000 new pdf forms online.

Here's an example: the 2012 Property Tax Valuation Appeal Form.  In this case, the user is lucky.  It is a fillable form and the intended user can fill it out before printing it and mailing it in.  An address is listed for the State Tax Commission which will receive and process the form.  The last page has the addresses of 29 county auditors who are also involved in the valuation process for their respective jurisdictions.  This process starts long before this form gets filled out however.  Statements are generally mailed out by the county auditors in mid-year that have the tax valuation on them. This goes to thousands and thousands of land-owners across the state.

Think of what you might automate here.  Obviously, the valuation process itself.  In most cases, there is already a system that manages this and often, the valuation information is already available online such as this parcel search for Salt Lake County.  Salt Lake County also has their own appeal form, which also must be printed and mailed in.  So let's automate this submission process, make it easy for the reviewer to see the forms and supporting information from a portable device like an iPad so that the review can be done anywhere, anytime.  Then lets provide other relevant information and smart analysis to speed up the review.  Let's create a way for the taxpayer to know the status of his appeal.  Then, we can automate the response.  There can be even more than this, particularly if it involves multiple jurisdictions.  Be sure to leverage a process such as the state of Utah's universal template that makes the process usable in a variety of formats, including tablet and smartphone.

Like I said, there are about 2000 new forms a year just for Utah, so we have a lot of business process and automation work to be done.  Let's get started.
Posted by David at 2:37 PM