I'm feeling guilty because Ari Herzog is suggesting that a blog should be treated as a child and not neglected or abandoned. That can be very challenging to do, especially with the proliferation of microblogging and other social media. It is certainly much easier to Twitter than to blog, at least it is for me at the current time.

Regardless, much has happened since my previous blog post to be sure.

4-Day Work Weeks
We are now two months into an experiment by the state of Utah with a 4-day work week. Overall, it has been a positive experience, although there are challenges for both employees and citizens. I started to commute by express bus when the state began the experiment, partly just to make sure I understood what other employees might be facing a little better. I have to catch the earliest bus of the day, leaving home at 5:15 am and then come home on the last express bus which leaves Salt Lake City at 6:05 pm. That makes for a fairly long day. The problem is when one misses the bus, connections add an extra 1 1/2 hours so I don't get home when that happens until 8:30 pm. Obviously, having Friday off is a plus, but there is always so much to do on Friday that I can no longer accomplish on other days.

I have been tracking the utilization of our website on Fridays to see what differences we might see when state offices are closed. What we did see in August, was that although there was not a major increase in visits to Utah.gov on Friday, there was a much higher utilization of online services, something we absolutely wanted to see. One service was up as much as 80% in August over the previous month.

Just yesterday, the State of Hawaii announced that some agencies would participate in a pilot of a 4-day week.

Twitter
We continue to see interest in our use of Twitter. There was even coverage in USA Today. And we have added a new Utah Calendar twitter with current events.

Green IT Blogging
It's good to see Paul Taylor blogging again. I have always enjoyed Paul's comments and presentations on egovernment. A couple of weeks ago, Paul posted on the "Greening of the Public CIO". Although we have implemented many green-related IT initiatives here, we haven't fully measured the impact of the existing and future initiatives. This will continue to be a major issue in 2009.

More New Services
Utah agencies continue to produce new online services making our total state online services somewhere around 875. Some of the recent ones include:
just to name a few. The Public Meeting Notice Website also is required use by all public entities in Utah as of October 1st. It includes all kinds of new functionality and you can subscribe to any public entity's RSS feed to get meeting updates from any of about 3,000 entities.

Other
Last week, Cathilea Robinett came to town to present Governor Huntsman with the 2008 Digital State award. The Center does a great service to states by spurring these competitions 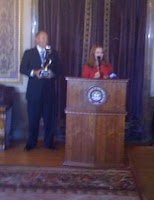 which urge state government to go beyond what they would normally do. And Utah is very honored to receive this award with some of the great things that other states are doing.

I just noticed that Idaho State University partered with the Utah Education Network for access to Internet 2 and National Lambda Rail.

It's interesting to note the success of Utah's charter schools in meeting NCLB performance standards.

We're continuing to add multimedia channels to Utah GovCast as it grows into the start of its second year. Hopefully, we can find resources to continue to enhance it.

What can we learn from today's report on Homeland Security's next generation information sharing system?

EPA's new website certainly looks more green and 2.0 than it did before.
Posted by David at 3:35 PM

Thanks for the plug and the inspiration to others. I hardly consider a blog that hasn't seen a new post in a few weeks as abandoned, but I'm happy to see the effort.

On your Twitter note, have you heard any rumblings of Utah cities/towns creating official Twitter channels? Or is it mostly on the state level? Is YouTube or other video sharing sites used at all, for sharing, say, gubernatorial press conferences to the masses?