Understanding the Benefits of e-Government 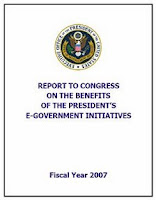 The President's 2009 Budget suggests that the core egov initiatives have resulted in savings of $508 million dollars in 2007. I'm trying to understand how that number is calculated as we try to document the performance results of egov in this state. Here are some of the numbers behind it:
However, the FY2009 federal budget request for IT includes a $2 (or 4) billion increase. But, only $45 million or so is for the 24 (or 25) egov initiatives. I found the entire OMB report (it's 248 pages long). A search of the entire document finds 373 references to savings through egov, most of which identify very specific man-hour or dollar savings.
Posted by David at 10:27 AM

Yeah, the state has saved with its new IT department. If they have saved any money at all it has all been lost in the wasted time and energy the new confusing department.

Makes sense that a department buys its IT equipment then gives it to DTS then rents it back from DTS.