Fox reports on the situation in Wells, Nevada following a 6.0 earthquake:

Unlike what we have seen from some other state websites, there is still very little information on Nevada.gov other than this announcement that the Governor will visit the area (that was 12:30 yesterday) - no followup about that visit or what citizens can expect. This is not a good example of how to provide information through the state portal. New maps detailing the impact of the quake are available on USGS. The quake was felt by those who were in the building I am in at the time. Hundreds of people reported feeling the quake in Salt Lake City and surrounding areas. You can see from this map that this area of Nevada does not have much history of earthquakes. So, having a 6+ quake here is pretty significant. Some pretty good information on this quake and previous quakes in Nevada, including A Nevadan's Guide to Earthquake Preparedness is found at the Nevada Seismological Lab. As of the moment, however, the Nevada Emergency Management website says nothing about this event.

Utah is in a much more active earthquake zone. According to the Utah Seismic Safety Commission,

90% of Utah's population lives in active earthquake zones. If a 7.5 Richter Magnitude quake were to occur in the Salt Lake City area, it is projected that 7600 people would die and approximately $18 - billion would be lost to physical damage and loss of jobs and economic activity.

The Strategic Plan for Earthquake Safety in Utah was produced in 1995.

Looking at history, it's a matter of time 'til a big one hits here. 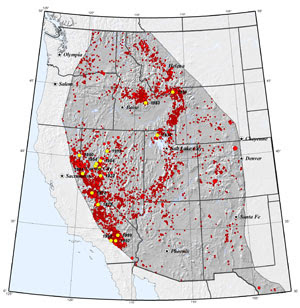 States or local governments that want an easy way to display current earthquake data could use the USGS RSS feeds for earthquake alerts at http://earthquake.usgs.gov/eqcenter/catalogs/ You could use a tool like Dapper to filter the content in item titles to create a feed that justs displays the alerts for the state or states of interest.