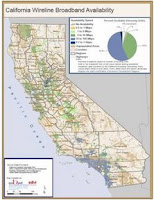 The California Broadband Task Force recently released it's report on broadband in the state, entitled "The State of Connectivity: Building Innovation through Broadband". According to the report, California leads the nation in broadband access, but would only rank 10th if compared to other nations. Just over 50% of Californians have access to service that exceeds 10Mbps. That's certainly not the case in the Bay area where 99% of households have access to broadband. On page 12 of the report is a table listing the types of applications that require higher levels of connectivity. The Utah Education Network will be requesting funding to upgrade their network backbone to 10g speeds. Looking at this table, you can see why they would be doing that if Utah universities expect to keep pace with the top research institutions as well as having bandwidth sufficient for the burgeoning needs of users. Initiatives like the legislature's bill, "Transparency in Government" will also be among the numerous factors driving bandwidth demand.
Posted by David at 3:36 PM