Government as a Platform

O'Reilly is putting on a phenomenal conference today in Washington DC, the gov2.0 Summit. Utah's Jeff Nigbur was able to participate as a presenter in the Gov 2.0 Showcase which featured presentations in several categories. Jeff's presentation was a winner in the "Government as a Protector" category. I believe that you will be able to view it online at blip.tv. His presentation was about the new Public Safety media portal which uses Twitter, Google maps and a variety of other services to keep the media and the public aware of incidents as they occur throughout the state. A new html 5 mobile app is completed this month which will meet the needs of reporters especially as they are mobile and need real-time information.

I have been thinking a little about Tim O'Reilly's statement that government is a platform. Government does not need to provide just neatly packaged applications and services like we have focused on in the second phase of the egov revolution, but can provide information and services that can be built upon and leveraged by others. This was part of our thought when we developed http://data.utah.gov which rolled out earlier this year. 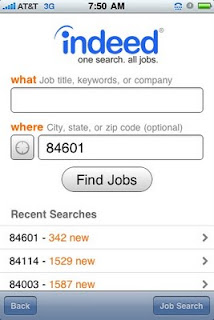 Two years ago, Utah and three other states partnered with Google on a project to increase access to government information. A key part of this project was sitemapping key data sets, one of which was the Utah jobs database. Users can now access new jobs directly through any search engine as they become available in the state's database. Several weeks ago, I noticed that Indeed.com was one of the top referrers to the Utah.gov domain so I spent a few minutes to see what they were doing. Indeed has become one of the top job search sites on the web and I could see how effective they were at mining the information that we had made available. Then I discovered that Indeed has an iPhone mobile application that is extremely effectived at finding jobs based on location. A lot of the jobs available through the Indeed service locally are those that are available from Jobs.Utah.gov which Indeed discovers! Jobs.Utah.gov has done 4,109,869 online referrals just through August this year! Only 172,641 referrals have been done through the offline traditional channel. Shows what can happen as information is made available. By the way, Utah unemployment this year has averaged about three percent less than the national average. I'm not sure what other ways people are leveraging the jobs data to add value, but it certainly has been effective.
Posted by David at 7:37 AM

The concept of government as a platform is a good one on the surface. Some of it needs to be changed, and to the extent that OpenGov and Gov 2.0 can open up the doors to this change, then it will. However, some of this will never change and it’s not necessary to try to change it. We wish O’Reilly and Camp will be back for Gov 2.0 Expo in the spring, but come back for a Summit too.

Dave- I ran across your "Government as a Platform" article today and thought you might be interested in this...

Let me know your thoughts.