On Wednesday, the Utah Department of Technology Services added 900 or so new employees in a major step towards total consolidation of IT services in the executive branch. The consolidation encompasses 23 agencies which will now all receive IT support from the new department. Governor Jon Huntsman Jr., CIO Stephen Fletcher, former Senator and astronaut Jake Garn, radio host Tom Barberi, and venture capitalist Dinesh Patel all spoke at the event which presented a vision for a new culture for IT in state government.

Channel 7 in Denver reports that "Life Elevated" will be the slogan for a new Utah tourism campaign. 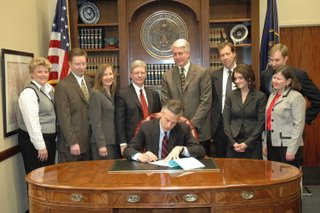