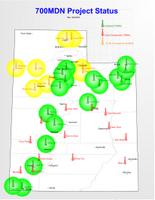 Bill Sipes discusses his experiences with ITS in the latest version of Wireless Week (an informal publication of the wireless group in the division that I direct):

"I have been thrust into a world that I know very little about but have been accepted, encouraged and challenged. I have learned enough buzz words to make it appear that I know a little about what I am doing and talking about. I have visited with the Navajo Indian folks in Arizona, been on several mountain tops, tried to climb that 100’ tower, talked with a number of emergency management folks around the state, staked out an area proposed for a communications site, talked and met with agents of several different federal and local government organizations, met with several sheriffs, police, and fire chiefs eager to establish better communications in their communities, even met with and spoken to a couple of environmental representatives expressing their concerns… talk about a growing experience."

Bill is involved in the buildout of our 700 MHz mobile data network (see picture) and other products.